I’m not vegan.  This is something that confused the students I spoke with earlier this year in a Feminism and Veganism presentation, and it may confuse some of my fellow food historians and food colleagues.  This is due to two main realities I grapple with in my research: 1) humans have a long history with dairy animals and dairy products that have created intricate social, economical, and biological dependency networks, and 2) all food systems have good and bad aspects to them, including those promoted by veganism.  Personally, I don’t feel comfortable rejecting one food system for another based on over-generalizations – and that is often what happens in the formation of certain diet cultures.  I’m all for moderation and thoughtfulness in eating, but I’m also aware that only a privileged group of individuals can execute this way of consuming food.

Despite my reservations, I cook and bake vegan when I can.  Why?  I think veganism, along with vegetarianism, gluten-free diets, paleo-diets and other dietary cultures, is good to think with.  Such diets help us contemplate different food relationships, and they often use experimentation and science to make lifelong favorites possible within dietary restrictions.  The re-creation of certain recipes to fit these models helps reveal the historical contingencies of our food systems.  It also shows what types of food certain people are not willing to give up, and which are able to be converted to different food network systems.

For example, the way humans have consumed sugar over the centuries has changed dramatically since the 16th century.  Sidney Mintz’s Sweetness and Power (1985) outlines some of these changes, and nutritionists continue to grapple with the economic realities and sociological meanings attached to sugar and what this has meant for human health today.  During the holidays, we consume more sugar than usual.  Cookies and candies are markers of tradition: they once symbolized wealth, and they continue to symbolize giving, friendship, and family bonding.   Sugar may be a necessity for these recipes – but vegans ask if eggs, butter, and milk are just as necessary when making such traditional treats.

Using one of my favorite vegan gingerbread cookie recipes – I want to walk you through some of the thoughts and questions I encounter as an ethnographer and historian of foods and feeding.  Again, “baking vegan” brings up questions of contingency, and I’m always asking if the “vegan age” is truly a contemporary one based on an intricate set of understandings about animals, food, and consumer responsibility that only came to exist in the 21st century.

Not all ingredients are equal, and history can show how the economy has affected our baking over the past century.  The history of cake mixes, for example, reveals that a surplus of molasses in the 1930s affected how companies began to re-package and advertise flour and mixes.  Similarly, historian Kendra Smith-Howard does a terrific job in Pure and Modern Milk (2013) describing how milk surpluses were managed by the government and companies.  The book shows this was partially done by pushing consumers toward “new” milk products in the postwar period – including skim milk, butter, and ice-cream.  So, sometimes what we think are recipes located in long traditions are actually located in contingencies related to supply and demand.  To think of cake mixes as located in an historical molasses surplus rather than egg surplus is also interesting, as many scholars have located concerns of “freshness” and “authenticity” in the use of eggs by postwar housewives.

My gingerbread recipe requires a good bit of molasses – but this wasn’t an easy ingredient to find at my 21st century Philadelphia city store.  Is molasses used today as often as it was in the 1930s through the 1960s?  Perhaps it is dependent on geographical location (I’m thinking shoo fly pies are less popular in California… though I could be wrong!)  What has come to substitute molasses in the 21st century?  What does molasses symbolize today?  And, is molasses more necessary for gingerbread making than eggs or milk?  Is it a characteristic of the cookie?  I think it is – and it is perhaps one reason the cookie can be taken up more easily by vegan bakers (than, say, meringue cookies, though chickpeas seem to be providing a new solution). 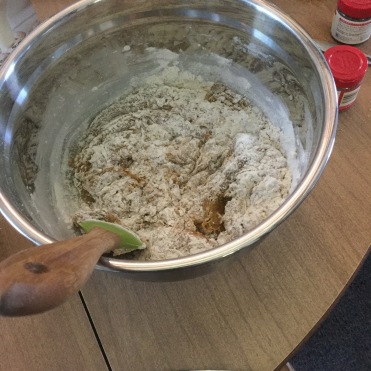 As chemistry developed as a discipline, so did cooking.  Certain ingredients help achieve certain characteristics in a baked good – and this is why following recipes becomes important in that attempt to get a similar result each time you bake.  Historically, some ingredients took more trial and error to develop than others.  One better known story is that of baking powder, which is said to have been developed in the mid-19th century by Alfred Bird who was trying to find alternatives to yeast and eggs (his wife was allergic to both).  By the 1880s, Calumet Baking Powder would be advertised as “double acting” with leavening starting in the bowl and continuing in the oven.  Ingredients like baking powder were created/discovered out of need to find alternatives, and they have since helped in alternative baking efforts like this recipe I’m using (which requires canola oil, baking powder, baking soda, and soy milk, with the added step of refrigerating the disc of dough before rolling and cutting).

Eggs and milk are added to gingerbread to create a certain quality to the cookie.  For a long time, eggs were understood to be the primary binding agent for cooking – giving baked goods their structure and stability.  But with the development of cooking powders, milk substitutes, and experimentation with bananas and applesauce (with their own food histories!) – eggs are no longer the “one and only” method for achieving desired structures or textures.  Technology also allowed some of these methods to come about in the first place.  Professor John Walter of the University of Essex credits the semi-closed oven of the 18th century with a “baking boom” that permeated Western culture’s affiliation with cakes and cookies.  Nineteenth century chemical developments like baking powder went hand in hand with these technological changes.  Even the status of fresh eggs to be included (or avoided) from recipes was predicated on notions of “freshness” that relied on the development of the refrigerator.

Does the gingerbread I’ve made look and taste like gingerbread?  To me, absolutely!  To some of my family members, not so much.  The texture, the color, and the taste seems “off” to those who are more familiar with it; those who have made gingerbread consistently every year for decades.  Gingerbread was not something I made or ate consistently with my family, so the recipe’s end result does not bother me as much.  If anything I find them more earthy to the taste and soft in texture, which are preferred qualities for me.

Just as economic markets, technologies, and ingredients change, so can tastes.  There are scholars that attribute certain tastes to certain time periods – often based on what was available at the time.  This includes Kellen Backer’s work on the creation of the American industrial food system that still permeates our tastes today: from WWII quartermaster corps to frozen and canned foods.  Taste and agriculture is also a big subject for debate today, particularly as consumers define close relationships between “taste” and “authenticity” in food crops amidst genetically engineered, conventional, and organic agricultural methods.  Taste is less about sensation in these instances, and more about the moral, historical, and – related to this – nostalgic relationships humans have with their food.   This makes vegan gingerbread interesting to me, for though the taste is not quite the same, it is similar enough for it to achieve its nostalgic purpose.  It may even be considered “authentic” if its absence of eggs or cow’s milk is not brought to the attention of its consumer.  I’ve recently learned that Oreos are a fantastic vegan cookie choice – but I would have never placed them in this category based on taste alone.

These are just some of the ideas and questions that come to mind as I bake, cook, and eat foods made with certain ingredients in certain ways.  Perhaps you’ve changed a recipe due to surplus resources, new technologies, allergies or taste preferences?  I would love to hear about such experiences in the comments below!