Livestock shows have provided an opportunity for farmers to come together and appreciate their shared knowledge of animals since the 18th century.  Though arguably initially organized to promote ideals held about animals by the aristocracy, particularly in England, by the end of the 19th century shows were spaces where ordinary farmers could trade information about animal rearing and celebrate the best breeders of their time (see Ritvo 1987). 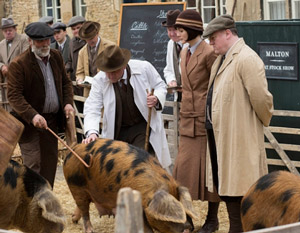 fans witnessed the importance of Lady Mary’s aristocratic participation at the “fat stock show,” which showcased the skill of ordinary farmers from the village.  This episode was a great example of the tensions and shifts happening between the English classes at early 20th century livestock shows.  Featured in Episode 2 of the 2016 season.  Photo Credit: PBS, 2016.

In the United States, agricultural shows gained momentum by the early 20th century.  One of the oldest national cow shows includes the American Royal, which is still held annually in Kansas City, Missouri.  With its first show in 1899, the American Royal was considered the first national exhibition to showcase purebred cattle in the United States.  But more localized shows across the country popped up years before and after this time.  This past weekend the Pennsylvania Farm Show celebrated its 100th anniversary, with its organization completed by state agricultural officials in 1916 and the first show taking place officially in Harrisburg from January 23-25, 1917.  It is considered the largest indoor agricultural event in the United States. 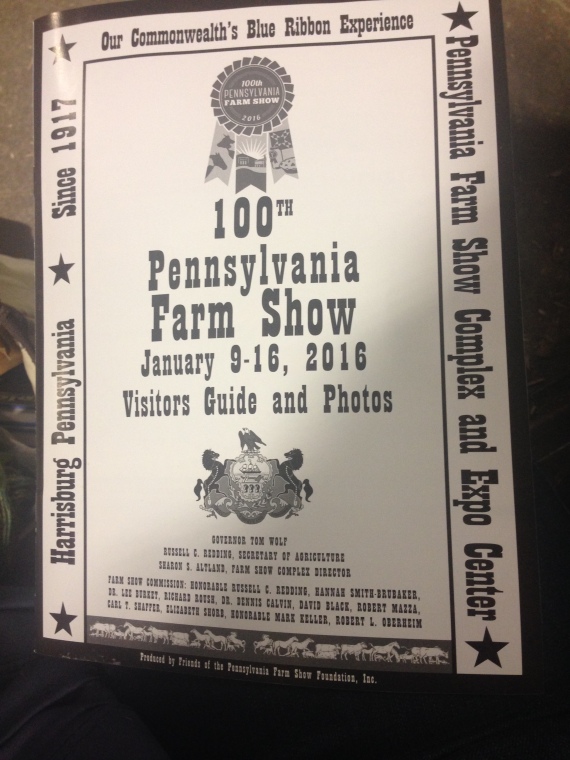 Walking around the Farm Show this Saturday, I encountered much of the old “sharing knowledge” doctrine that remains at the heart of these national, state, and local-level meetings.  Some of this knowledge is similar to what we would have seen in the 19th century, particularly the sharing of pedigrees in award winning animals.  For breeders interested in not only animal aesthetics but food-livestock utility, pedigrees help fellow farmers understand ideal breeding combinations.  High quality bulls and their families are of particular focus.  In the past, farmers advertised the studs of prize-winning animals for sale at the shows.  The popularization of artificial insemination and frozen spermatozoa technologies in the 1950s made breeding from desirable bulls easier, allowing bulls to contribute to offspring across the nation and around the world without having to sell or even move the animal.  Today, a dairy farm from the States and a farm from Japan can house daughters from the same sire without ever having to interact with the bull.

Pedigree information is exchanged in a few different ways at shows today.  Not only do show catalogs feature this information, but participating farms will often display these facts with a name plate hanging above the animal in her tie-area.  These plates can be lavishly decorated and often include the full name of the animal, her dam (mother), and her sire  (father).  Some plates may indicate longer lineages, and if the animal has been classified list her classification score.  An “EX” after a cow’s name, for example, means “excellent,” with her point score indicating how high in this category she was placed by a professional classifier. 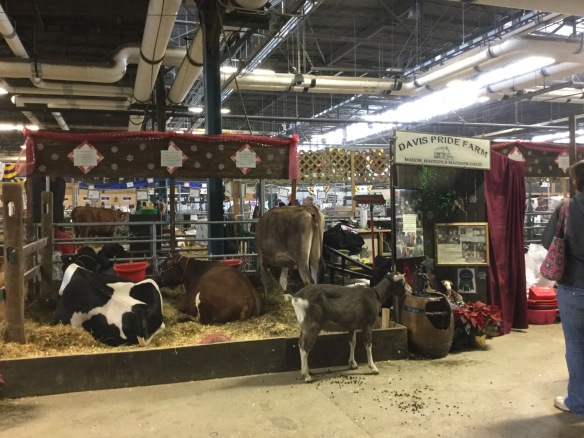 Notice the headboard including the name plates from Davis Pride Farm.  These signs featured the full name, sire, dam, and date of birth of each animal.  Photo credit: Nicole Welk-Joerger, 2016.

Showmen are also required to provide the names of the sires of their animals as they are walking them in the ring.  During the Purebred Dairy Cattle Association Dairy Judging School at the Farm Show, those who volunteered their animals for the judging competition were asked to provide birth dates and sire names over the microphone to help participants better compare breeding decisions with overall class placings.

The familial lineages of cattle were not the only ones presented at the Farm Show this year.  The lineages of the participants were also displayed in creative – really, beautiful – ways that showcased family participation.  Some families have made the Farm Show a tradition that has lasted over three generations.  This was the case for Justa-Beauty Farm of Rebersburg, Pennsylvania.  The family created a small display next to their cattle showcasing the farm’s animals that have participated in the show since 1937.  The center image of the display featured a family member with their Grand Champion Holstein that had won at the Farm Show in 1956.  Frames around this picture featured studio quality photographs of different cattle, some directly related to the champion.  Other families made similar displays but featured more images of children, parents, and grandparents exhibiting the animals at the Farm Show.  They were looks into history; small museum exhibitions dedicated to both human breeders and their animals – both part of long lineages participating in the show. 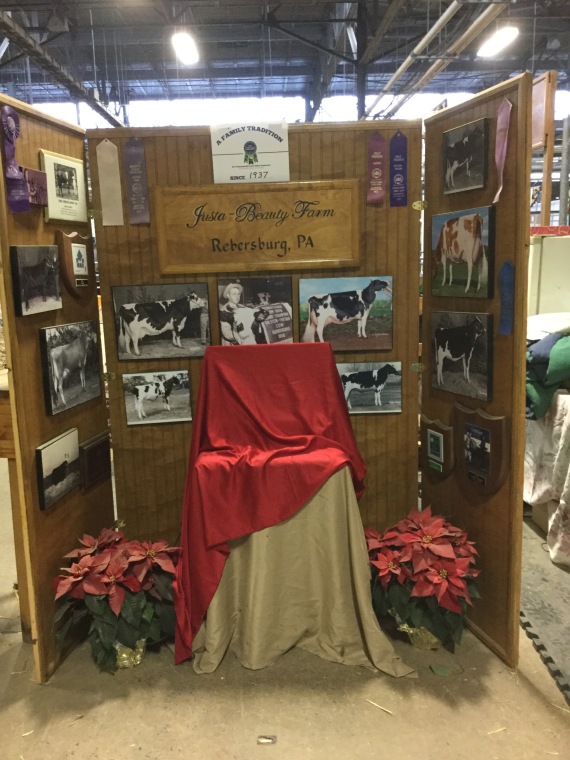 Many spectators of the Farm Show no longer come from farming backgrounds, making some of this pedigree information confusing and unrelatable (perhaps even for you reading this).  The Farm Show made it a point to create various “AgExplorer” stations this year with these spectators in mind.  The stations provided various kinds of generalized information geared toward educating the public about their larger food systems.  I was happy to see one station dedicated to educating families about what cows eat – asking children and adults to identify animal feeds from their appearance and texture.  There were stations about the bird flu, the size of an acre, and the importance of bees.  These probably were not the most important types of exhibitions to develop for the ag-integrated early 20th century audience.  But for the 21st century they offer a needed interaction between consumer and producer that happens so rarely in the agricultural industry today.  I think it was highly commendable for the Pennsylvania Farm Show to take the initiative to expand the knowledge-sharing doctrine of livestock showing to the greater consuming public, making even the most general information about animals in the food system digestible for a larger audience. 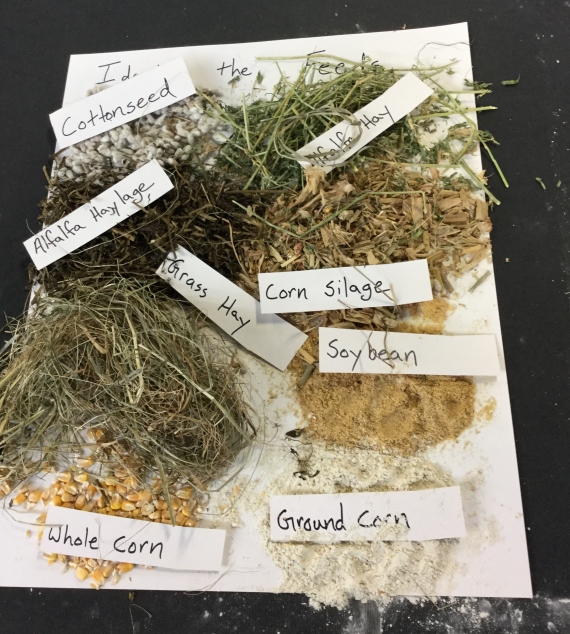 Ritvo, Harriet. The Animal Estate: The English and Other Creatures in the Victorian Age. Harvard University Press, 1987.

**Featured image from Hold Your Horses (2015).  It was an image shared by a farm family that has participated in the Pennsylvania Farm Show since the 1940s.