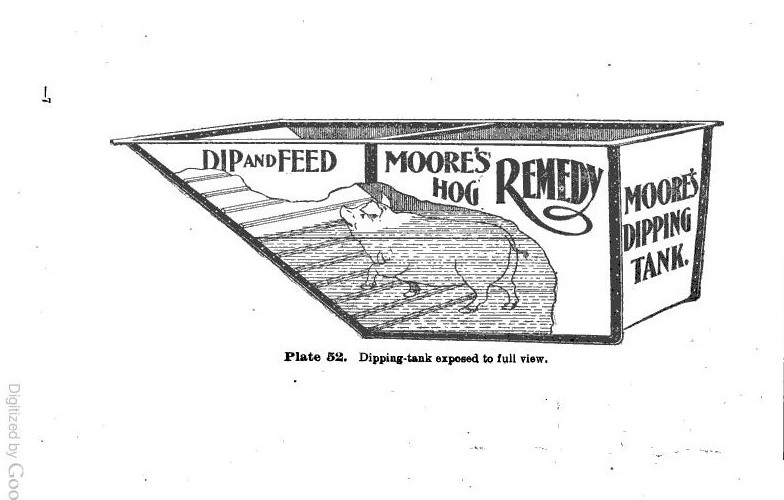 drive all cares away.

Ringing in the New Year holds different meaning for people around the world.  It is also accompanied by different traditions and rituals.  In Pennsylvania German culture, New Years Day is celebrated with a pork and sauerkraut dinner – believed to bring good luck through the coming year.  The sauerkraut is considered a symbol of bounty, but it was also an important staple dish during the cold months for Pennsylvania Dutch/Germans in nineteenth century America.  This is written about in more detail by Willian Woys Weaver, a food scholar who writes extensively about this culture – one that includes Amish, Mennonite, and Brethren religious sects now not only in Pennsylvania, but across the United States.  I recommend reading Weaver’s Sauerkraut Yankees (2002) for some interesting, old-timey recipes for sauerkraut, a section on its origins in Eastern Europe, and its cultural significance for these cultural groups in the past and today.  His most recent book, As American As Shoofly Pie (2013) is especially thought-provoking, as it addresses how new many of the “folk foods” really are for Pennsylvania German culture today (considering not only shoofly pie, but whoopie pies and pot pie).

The pig has additional symbolism that continues to reign in Mutterland Germany.  Eating pork in the new year celebrated the pig’s behavior in “rooting forward” – encouraging the consumer to “root forward into the new year” (Weaver 2002: 172).  In Germany today for the New Year, some areas continue the pork and sauerkraut tradition much like their American counterparts.  Those who pass on eating the pig are welcome to pig-sculpted marzipan called “Glücksschweine” or “lucky pigs.” 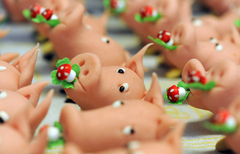 To my knowledge, pigs themselves do not recognize New Years.  But if they did, their menu for today would most likely consist of their usual pelleted pig feed.  Pellet feed can include a variety of different supplemental vitamins, but is made up mainly of corn, oats, or soybeans (if not a combination of the three).  Pelleted feed is understood to increase feed efficiency, as it allows the pig to eat more and consume more of the valuable nutrients needed for growing or finishing than if he was served loose batches of the raw material piled together (Miller 2012).  Organic pigs have similar diets, but are restricted to organic-maintained crops in the pellets.  Some farmers may choose to feed their pigs waste products (including cabbage and sauerkraut if available!), and others choose to pasture-raise pigs for a combination of scavenger-based food, grass, and grains.

Pigs were primarily pasture-raised food animals in the past, similar to many of the others we consume today (cows, chickens, etc.).  We can see a shift occurring with the development of experiment stations in the United States – where farmers, veterinarians, and researchers become obsessed with nutrients, calories, and “efficiency.”  This is clearly seen in turn of the century experiment station reports – including those from Kansas State Agricultural College (1904), Montana Agricultural College (1904), and the Maryland Agricultural Experiment Station (1899).  Experiments in removing pigs from pasture and placing them into “hog houses” were important for the Maryland and Kansas State reports.  In a comparison between different feeding and living conditions with body weight and meat production, their reports concluded that there were great benefits in weight gain through the partial confinement of pigs.  Montana argued that pasture was more important as it indicated, “when running on pasture, hogs will keep in good condition and even gain in live weight on a light grain ration” (Linfield 1904: 54).

Researchers were not only concerned with what pigs were eating and how, but also what was potentially eating them before reaching the New Years meal.  The creation of hog dipping methods was also gaining momentum during this time period, with the use of a special hog dipping tank mentioned by the Kansas State College as an important part of the experiment.  The station was concerned, as people who dip today are, with “germ diseases” – more pointedly lice.  The researchers wanted to use a means of getting disinfectants onto the pigs’ bodies without chasing and causing harm to the animals.  The use of a chute – encouraging the animal to move into a dipping tank freely and move out of it with the coaxing of food using a ramp – “kept [hogs] moving steadily without injury” (Otis 1904: 37).  Dipping is still done today when necessary, but spraying for lice has also become a popular solution to discouraging the disease carrying pest from eating hogs.

Before the efficiency of pig meat production was questioned, pigs overall were symbols of status, wealth and fertility in Germany among other countries.  To provide a pig as a gift to someone during the holidays was extremely significant.  Though pigs are interacted with in much more limited ways today, in part through industrialization, urbanization, and the development of niche food production science, they still carry significant meaning through both pork and sauerkraut meals and marzipan candies.  And much is still invested in maintaining the breeding, rearing, and health of these animals for humans to later consume. Happy New Year!